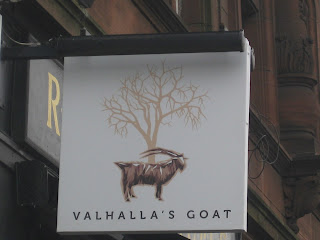 There was a time, not too long ago, when your choice of bottled beers from Glasgow’s off licences was strictly limited to those six bottles for a fiver deals that were always accompanied by the obligatory blue plastic carrier bag. You could have had any type of beer that you wanted as long as it was Stella, Carling, Tennents, McEwans and one or two more of the stack ‘em high, sell ‘em cheap beer brigade made by the brewing behemoths. 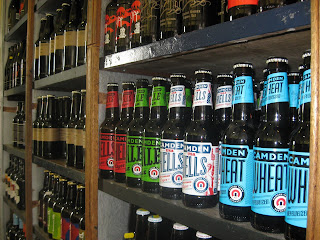 However, that was then. 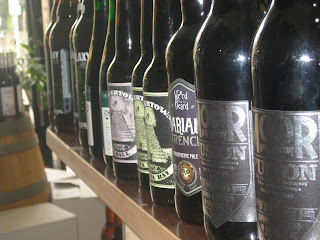 In the past year or so, Glasgow’s bottled beer choice has improved markedly. Partly driven by changing consumer taste but also by keen beer drinkers who, frustrated by the limited choice and poor range of beers available in the ‘Beer Green Place’, saw it as their mission to try and change Glasgow’s beer landscape completely. 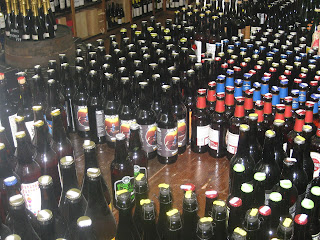 Take Derek and Alex of Hippo Beers, for example. Two beer enthusiasts who simply had had enough of struggling to find decent beers to have at home so decided to set up shop at Queen Margaret Drive in December last year selling a super selection of UK, US and Continental beers. The Hippo Beers boys are driven by their love of beer and their passion for their product seeps from every pore. You may think that’s empty hyperbole but go into Hippo and ask them to recommend a couple of beers and you’ll see what I mean. The Hippo Beers boys are ale evangelists and craft converters. 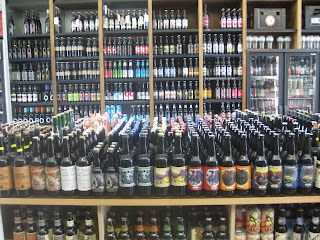 Today, I paid my first visit to a new beer shop that only opened at the weekend. I say only opened, but that’s not strictly true. It’s been open a while under the guise of QuelVin and before that it was a branch of Oddbins. However, it now has new owners and it goes by the rather fetching name of Valhalla’s Goat. The new owners, Scott and Bruce Williams, are no strangers to the beer industry as they are the pair behind the Williams Brewery. The Brothers also own Inn Deep Bar which is situated in a couple of old storage arches directly below Valhalla’s Goat. Inn Deep has been one of my ‘go to’ bars since it opened at the tail end of last year. It serves an intriguing assortment of cask and keg beers and you are often likely to see strange and exotic beer beasts on their menu. 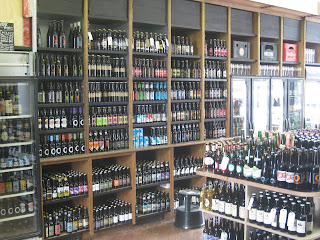 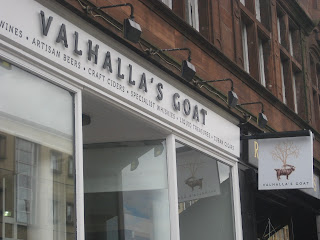 Probably, as much as I’m going to like Valhalla’s Goat. 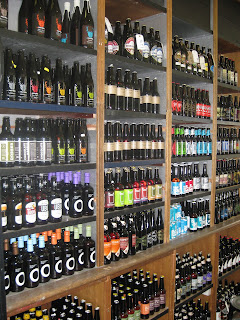 The first thought that passed my mind as I scanned the row after row and shelf after shelf of bottle after bottle was that the Williams Brothers must have built up a load of beer contacts in their years in the business. It shows on the shelves that creak under the weight of a huge selection of beers from all over the globe. I could begin to list them but I would be here a while. I’ll let the photos do the talking. 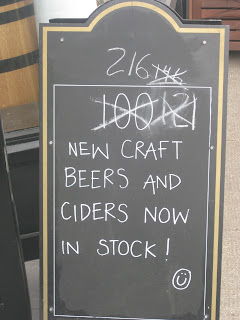 The board outside the shop assured me that they had 216 different beers within. I wasn’t going to count them all but the selection was impressive. However, Valhalla’s Goat is a thirsty beast and the brothers intend to keep the Goat sated by stocking even more bottles than they currently have. They aim to have over 500 beers when fully laden as well as a growler filling station with three taps. Two taps serving keg beer and one serving cask. Also, given their proximity to Inn Deep, the intention is that all of the beers on sale in Valhalla’s Goat will be available in the bar. 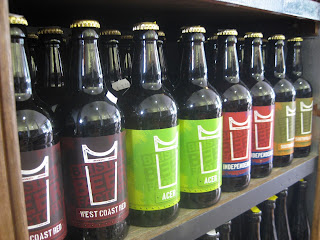 With Hippo Beers now established and the arrival of Valhalla’s Goat, it’s a good time to be a Glasgow beer drinker.


- Valhalla's Goat can be found at 449 Great Western Road, Glasgow - 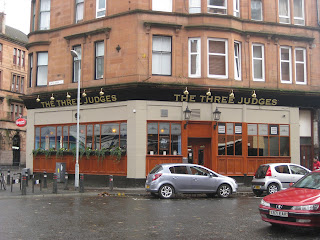 To Glasgow, where news reaches me of a really exciting and rather touching story of a beer festival planned for June.


It’s a human story centred around one man, his love of beer and his desire to share that passion with the world and life’s experience is all the better for hearing it.


It’s the story of a barman. His name’s Ronnie. Ronnie Anderson. He’s just a barman. The guy who knows your name, pours your pints and clears up the detritus of your evening on the ale.


But, he’s more than just a barman. He looks after the cellar, selects the casks and ensures that the beer you drink is kept and served in the best condition possible.

Every proper real ale pub has a Ronnie.


My Ronnie works at the Three Judges in Glasgow. He’s 65 years old in June and as a recognition and celebration of Ronnie’s beer knowledge and craft, the manager of the Judges, Angela Bradley and pub owner’s Maclays have asked Ronnie to choose his top 65 beers, one for each year that Ronnie’s been thinking about beer.  Ronnie’s best 65 beers will be available in the Three Judges during the month of June.


As you would expect, Ronnie is rather “chuffed” with the offer and said, modestly, that “it is nice to be appreciated”.


So, what beers and breweries is he planning on getting in for his ‘65 of the Best’ Beer Festival? When I spoke to him he was initially tight lipped, but after a few pints of Fyne Ales’ latest offering, Aonoch Mhor, he began to open up and, with a glint in his eye, he regaled me with a wish list of breweries and beers so delicious and delightful that my mouth watered.  Dark Star, Fyne, Hawkshead, Oakham, Mallinson’s, Bristol Beer Factory, Harvey’s…


The list went on and on and on and on. It read like a Who’s Who of the best beers and breweries of the past decade. Ronnie admits that “it will be a challenge” to get all of his 65 beers but it is one that he is relishing.


He is also planning to have a weekly Meet the Brewer events during June with local brewers in the Judges talking about their beers.


Ronnie’s ‘65 of the Best’ Beer Festival coincides with the West End Festival and runs from 31st May to the 30th June.


Now, wasn’t that a lovely story? 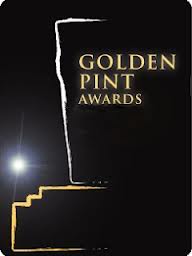 Time to resurrect the blog for a timely look back through the bottom of a beer glass at the year just past. I may not have been as prolific in the blogging of my beer experiences as I would have liked but just because I wasn't blogging didn't mean I wasn't out there taking in and tasting what was a vintage year in beer. Indeed, less time spent writing meant more time sitting in lovely pubs enjoying wonderful beers in the company of great friends . It's the perfect beer equation;

How can you possibly pick just one beer? I've had many solid and likeable beers this year. Fyne Ales' IPA Project more than satisfied my curiosity. As did their one off beers such as Cloudburst, Roxy, Superior IPA and Zombier. Cloudburst, in particular, was an outstanding beer and one that I hope they repeat in 2013. Hawkshead's range of beers still impress with their quality and consistency. I've yet to have an iffy beer from them and long may that continue. Their NZPA and Windermere Pale beers always make me dance inside when I first set eyes on their pumpclips in pubs. Other notable beers have included Oakham's Scarlet Macaw and Cromarty's Hit the Lip and Happy Chappy. Luckie's Brown Ale was rather special too.

I was fortunate enough to spend some time in Germany over the summer and indulged myself with many fine beers so to whittle it down to just one that stands out above the rest is an impossible task. I've got it down to three and in no particular order they are; 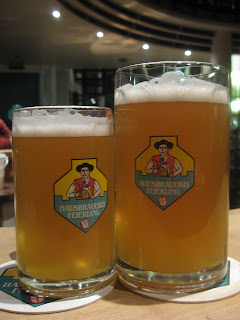 All unfiltered and as hazy as an old London fog but, in my opinion, all the better and tastier for it.

I imbibed more Fyne Ales Jarl than any other beer in 2012 but that's probably down to being more widely available than some of their other beers but I'm going to resist the temptation of making it my best overall beer. Instead, I'm going to go for its slighty bigger, punchier and bitterer brother Cloudburst that made a fleeting appearance on the beer stage in September/October. It's been much missed since.

Decisions, decisions. When reflecting on this category, I thought I would base it on the criteria of who makes consistently great beer across a range of styles that I would be confident of getting a really nice pint regardless of which beer I chose. I also took into consideration which breweries I tend to drink most of. Therefore, it could only be two and in joint first place are:

Pub/Bar of the Year

It's an easy choice this one. This pub is the living embodiment of the perfect beer equation;

It quite simply is the best place to spend a few hours appreciating the bonhomie, beers and banter.  It fits perfectly like an old glove and feels like a long lost friend. The barstaff are brilliant too. It is the ad hoc Fyne Ales brewery tap in Glasgow. Some, who really should know better, have cruelly and disrespectfully labelled The Laurieston a "Jakey Pub". This does a dis-service to the pub, the punters but above all to the publicans. The Laurieston is the textbook definition of a proper community pub and it should be cherished. I just wish there were more pubs like The Laurieston.

Beer Festival of the Year

Supermarket of the Year

Independent Retailer of the Year

Glasgow's not bad now for bottled beer with The Good Spirits Co putting on a grand show by expanding their range of domestic and continental beers. Every time I go in their beer range seems to grow. Long may that continue.

Hippo Beers have just opened up in the West End of the city and I've been impressed with what they are trying to do too. They hosted a superb tasting session at Brel prior to opening as part of Glasgow Beer Week and I was bowled over by their infectious enthusiasm for beer. It struck me as a labour of love. I'll be keeping an eye on Hippo Beers in 2013.

Another one to watch out for is Alesela Beers who plan to expand from online retailing into running their own off license premises in the city centre of Glasgow. I've had nothing but great beers and first rate service from Alesela online and wish them well in their new venture.

I don't buy as much as I used to from online beer retailers but in 2012 I tended to use Alesela Beers.

I greatly admire what Rich at The Beer Cast has done for beer coverage in Edinburgh. He is a true beer advocate.

Mr Shafi takes the prize for the best beer blog. His Walking and Crawling blog is always a pleasure to read. It is detailed, informative and Adam's passion for beer shines through. If there was any justice in the beer world then Adam's collection of musings and meanderings off beer's beaten track should be turned into book poste haste. Well done Adam. More power to your pen.