The Kernel at Cask Pub and Kitchen 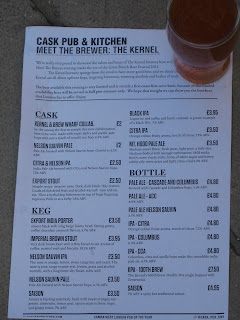 
'Twas the night before the start of the Great British Beer Festival, and scores of hopheads from London and much farther afield have gathered at the Cask Pub and Kitchen in Pimlico to celebrate the exceptional beers from an exceptional brewery.

The event that drawns them here like hungry yeast to fermentable sugars is a 'Meet the Brewer' night with the ale alchemists from The Kernel Brewery who have the rather consistent knack of turning water, malt, hops and yeast into liquid gold.

However, it's more than just your usual, run of the mill brewer event where you roll up to the pub, shake hands, shoot the breeze and sample one or, if you are lucky, a couple of the Brewer's Fayre. This, instead, is an off the scale, extra special event where a dozen of the taps at the Cask have been taken over by a gorgeous infestation of lovely keg and cask beers from one of the most exciting breweries in the UK at the moment.

The Kernel make great beers. Big, bold beers that generally fall into two categories. 'Pale and hoppy', that capture and characterise the essence of the single and mixed hops used and 'dark and roasty', that tip their hat to, and borrow from, the brewing history and tradition of London's dark beers. As the flyer for the event says, "The Kernel are all about upfront hops, lingering bitterness, warming alcohols and bodies of malt." 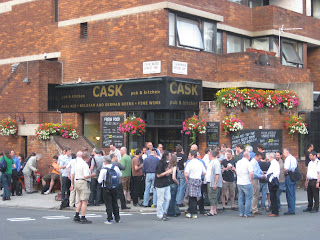 On the bar were 4 cask and 8 keg beers - a veritable cornucopia of Kernel - showcasing some of the best that brewer Evin and the Kernel team make. The event had attracted beer lovers and tickers from as far flung places as Sweden, Norway and the United States as well as from closer to home to indulge in some Kernel standards as well as a taste of some of their newer beers.


Anticipating overwhelming demand for, and limited supply of, the beers the pub had rationed them to half pint measures only and by the time I got there, thirsty drinkers had spilled from the pub and occupied the road and pavement outside. Inside, the bar was three deep as people jostled to sample as many beers as possible before they ran out. This was a full forty five minutes before the official start time of the event. I was glad I got there early. 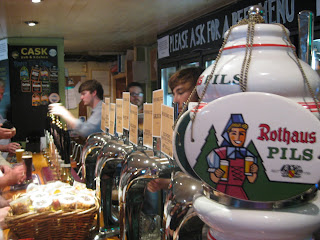 I managed to catch the eye of one of the bar staff. I threw it back at him and out of appreciation, he poured me a half of Citra IPA that popped and zinged with fruity citrus freshness which immediately hit the spot on a muggy and humid August evening. Having located my beer buddies for the night, we settled in the sunshine to enjoy some beautifully made and very, very tasty Kernel beers.

Next up was The Kernel and Brew Wharf Collaboration made with a trio of super alpha, pacific jade and sorachi ace hops. I liked it but some felt that the sorachi overwhelmed the other two hops.

And so the evening continued. Glasses were passed, beers were tasted and opinions shared as the relative merits of each beer and hop variety were disected and discussed. It was a delightful evening.


All the beers were exemplary but two must be given special mention as the stand out beers of the evening. The Kernel Saison was an outstanding representation of this style of beer with a big, big nose full of fresh, sweet summer citrus notes of oranges, tangerines, clementines and lemon zest with Belgian yeasty breadiness, super smooth mouthfeel and a dryish fruity finish. It was lovely. I hear the bottle version is even better than the keg. I made a point of picking up a couple of bottles of the Saison to check out that theory. I look forward to letting you know.

The Mt. Hood Pale Ale was extremely nice too. It was a light and crisp pale ale with subtle hop notes and a sweet citrus edge that let you know that it was there in a very gentle and unobstrusive way. I detected some very light peachy/nectarine notes. It was very pleasant and the common consensus was that it was a most agreeable beer.

The Kernel at the Cask and Kitchen was a great night and I felt very lucky to have been in the right place at the right time to enjoy one of London's best breweries firing on all cylinders with a truly exceptional range of beers.

Email ThisBlogThis!Share to TwitterShare to FacebookShare to Pinterest
Labels: Cask Pub and Kitchen, The Kernel