A taste of Kernel Brewery 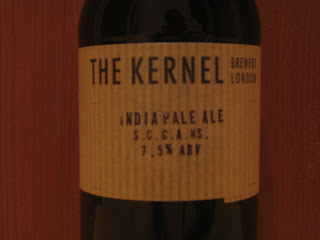 As a regular visitor down to that there London, one of the pleasures I always look forward to is a visit to Stoke Newington's, The Jolly Butchers. Not just because it's a cracking place to while away the afternoon but also because I know that I'm guaranteed a nice selection of lovely, refreshing bottled beers from The Kernel, one of London's finest and best regarded breweries.


One of their stand out beers for me last year was S.C.A.NS IPA. It was a juicy cornucopia of hoppy loveliness in aroma and taste that got it's name from the Simcoe, Citra, Apollo and Nelson Sauvin hops used in creating the beer. So, when I heard that they had just produced a beer called S.C.C.A.NS IPA, I knew immediately that I just had to get my hands on a bottle or two and give it a try.


The hoppy acronym of the beer moniker has been changed to include the addition of Columbus hops to the brew and as I opened the bottle, I hoped that it would be as good as the other Kernel beers that I had previously had the pleasure of tasting.


It poured with a big seductive glug and in my haste to get stuck into it I got a little bit of the yeast sediment into the glass which meant that it was a little bit hazy but was still a vivid amber colour. A quick smell revealed a fresh, vibrant, resinous aroma of tangerine, mango and chewy fruit salad. It smelled fantastic.


It finished with a lingering sweet fruity hoppiness and a slight alcohol burn. It is 7.5% after all but the alcohol is very well hidden by the handful of hop varieties used in producing this gorgeous beer.


It reminded me of a gentler, tastier version of BrewDog's Hardcore IPA or Mikkeller's I Beat You. Not as pungent and aggresively robust as the Hardcore or Mikkeller but more drinkable.


So, hats off to The Kernel Brewery for producing another excellent beer. I can't wait to open the bottles of their Black IPA which I've got sitting. I hear that, too, is rather special.