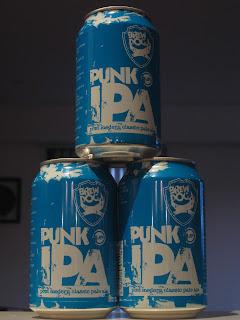 A few blogposts back, I had the pleasure of trying some Maui Brewerie's canned offerings, Big Swell IPA and Coconut Porter. Both were nice and the novelty of having lovely beer from a can was not only different but also very refreshing. Since then, I've managed to get my hands on some more great cans including Caldero IPA and Pale Ale as well as Buckbean's Black Noddy Schwartzbier. And now Brewdog have just released their signature beer Punk IPA in a wee tin in their quest for global beer domination.


It would appear that good beer in cans is a bit like waiting for a bus - none for ages then suddenly a whole load of different ones turn up trying to tout for your business.


I'll cover the Caldero's and the Buckbean in a later blog but for just now, I want to crack open the rather alluring Brewdog can, get it poured and give it the once over.


This is a 5.6% ABV brew as opposed to the 6% of it's previous bottled incarnation. It also is slightly stronger than the 5.4% Cask version of Punk I had tasted at the launch of their Alice Porter last month. 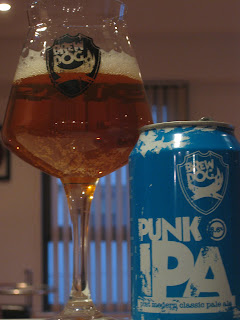 .
The ring pull quickly flicks backs to reveal a lovely nose of fresh resinous fruity hop aromas. Given that these were canned less than a week ago, I had expected it to smell fresh but not as lovely and juicy as this was. It was bursting full of gorgeous mango and peach notes that enticed and enveloped my nose and mouth. My taste buds were dancing with excited expectation that demanded to be sated.


It tasted of even more fruit than the aroma with grapefruit, passion fruit and yet more mango and peach to the fore. Some Kiwi fruit was also present but it was noticeably sweeter than any of the cask, keg or bottle versions of the Punk that I had tried before. I'm not sure if this is a good thing. It was okay with the couple of cans that I tried but it's sweetness could be an issue if you are planning on sinking a few of them.


The finish was not as dry and cheek clenchingly bitter as previous versions and again, I think this is to the detriment of the beer. It's all a matter of personal taste but I like my beers with a nice long hoppy dry finish and this doesn't have it in heaps that the original version had. It's a nice beer, don't get me wrong, but I think that it lacks that certain something that usually defines a BrewDog beer.


For a BrewDog beer, but it's remarkably unremarkable. It smelled divine but disappointed with the sweetness and the lack of a long dry bitter finish.


For a company that bases it's marketing strategy and brand identity on being uncompromising, I fear this beer does the opposite.

.
Posted by thebeermonkey at Wednesday, February 16, 2011