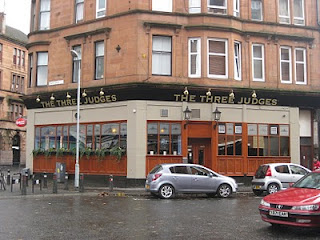 .
I see from this article in the Scottish Licensed Trade News (SLTN) that Glasgow brewing behemoths, Tennent Caledonian Breweries (TCB) has just secured a deal to become the main beer supplier for Alloa based Maclays Inns who have a portfolio of 26 managed pubs across Scotland.

My local real ale pub, The Three Judges, is a Maclay's pub but what makes the Judges a bit different from other Maclay's pubs is that they are given a bit more latitude and choice to decide what real ales occupy the eight pumps at the Judges given over to guest ales. These are usually sourced from Flyer and Firkin.

This new deal between TCB and Maclays still allows for Maclays to source "certain products outwith the agreement" however, according to the SLTN article, Tennent's believes that it will be able to "cover most of its (Maclays) beer needs". What 'certain products outwith the agreement' are TCB referring to? Well, Greene King, which own the Belhaven range of beers, has said that they are "delighted to continue to supply a selection of brands to Maclay".

My greatest fear is that this deal could restrict the Judges' ability to continue to select from a wide range of breweries and beers that increase drinkers choice and enjoyment. Hopefully this isn't the case and the Judges will still be able to choose and showcase some of the best beers from all across the United Kingdom, rather than being lumbered with a list that contains widely available, generic and lowest common denominator efforts from the likes of Greene King, Belhaven and Tennent's attempt at 'Scottish Craft Beer' (their words, not mine), Caledonia Best.

Time will tell.
Posted by thebeermonkey at Thursday, April 05, 2012