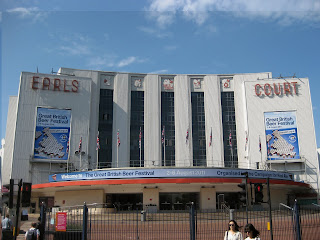 .
The Great British Beer Festival has now finished for me. I've been, gone and come back again relatively intact and unscathed.

I had an absolute blast and will take with me many fantastic memories that will linger a lot longer than the beer stains on my jeans.

You'd think that a festival for beer would be all about the beer.

About trying new ones and returning to old favourites.

But it's more than that.

It's about the spontaneous happenings, the chance encounters, the making of new friends, the renewing of old acquaintances and the often surreal experiences that make this event such a great success. And the beer.

The beer provides the backdrop to, and the catalyst for, these social interactions that makes this event so special.

And it was a special event.

Tens of thousands of people, over 700 beers, five days and one common purpose - an appreciation of  beer.


The beer I had were, generally, very good. As planned, I spent most of Tuesday at GBBF trying the beers from the International bars. Bars being plural as the Bieres sans Frontieres had been, this year, split and seperated over four bars which were situated apart from each other rather than being centrally located as in previous years. I had been originally sceptical of this change but, in all fairness, I have to say that I think it worked very well. Not only did it mean that the queues for these bars were dimished, it also meant that a wider and more diverse selection of foreign beers could be showcased. Particularly, a vast selection of excellent Czech beers.

The range of the Czech's were superb and the choice and quality of these beers were one of the festival's highlights. I particularly enjoyed the Matuska Fastball 9 - a superb 3.8%  hoppy, citrussy unfiltered beer with bready malt notes and lots of U.S. hops, Matuska Golden Rocket IPA 7%, and  Broumov's Pepper Kvasnicak Nefiltrovane and Coriander Kvasnicak Nefiltrovane. The Broumov's were really interesting beers. Both had the same 5% unfiltered Czech lager base but one was enhanced by pepper and the other coriander. The coriander beer was one of my boomerang beers of the festival - one that I returned to quite a few times over the event.

However, one beer that I wont't be returning to any time soon was Ballast Point's Habanero Sculpin IPA, a spiced up version of their award winning IPA with added Habanero Chilli. This was an extreme beer that kicked like an angry eight legged donkey and had a roasting, rasping sandpaper burn that left my throat raw and me looking for Greek yoghurt to kill the sting.


Credit to the barman, though. I had asked for a third of the Habanero Sculpin but the barman insisted that I dry a drop of it first before to see if I really wanted more of it. I'm glad that he did because one taste was enough of this toxic brew for me to realise the error of my ways. I doubt if I would have lasted the third of a pint.


My second boomerang beer was the two year old Cantillon. It was lovely. Sharp, sour but above all beautifully balanced and very smooth. Another Lambic also floated my beer boat this year. It was Revelation Cat's three year old Lambic that had been aged in a Laphraoig whisky cask. An oak aged Lambic! A strange concept but one that worked for me.

So, a Mild won Champion Beer of Britain. No great surprise in that. I had a taste of the winning beer, the Mighty Oak Oscar Wilde, a 3.7% Mild and I have to say that it was nice. It is a well put together roasty, toasty beer that was pleasant to drink. Whether it was the best beer there, that is for the judges, and not me, to decide. Some people were talking and tweeting about the result as if it was the end of civilisation that a mild had won but that was just hysterical and hyperbolic kneejerk nonsense.


I stumbled upon a meeting of the Parliamentary Camra group in which I did something I've never done before in my life - I applauded a speech by a Conservative MP. The speech was on the impact on communities of pubs closing and I clapped when he promised a full inquiry into restrictive pub practises that limit consumer choice and hinder the growth of micro-breweries. He also said that the Coalition Government were determined to act to enhance the value that pubs bring to the community.

As Nigel Evans, MP, who was also in attendance, said "When the pub closes in a community, it's heart dies". Camra Chair, Colin Valentine welcomed the Government's support by stating that it's "great that politicians are listening" and pledged to continue the work that Camra does in bending their ear and providing an evidence based approach that hopefully influences the parliamentary decision makers to give the British brewing industry all the support it needs. It could start by creating parity between the duty charged on beers and spirits. That would be a very good beginning.

The evening ended to the gorgeous strains of a string quartet that played beautiful blissfilled music that was the perfect melodic icing on a beautiful, beer filled cake. 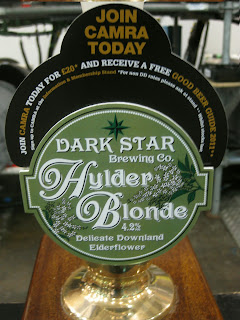 Wednesday continued in a similar vein to Tuesday. More Czech beer, more lovely Lambics and some exceptional UK cask. The Dark Star Hylder Blonde - a delicate, palate cleansing beer that danced delightfully like an elderflower angel on my tongue was divine. Two other elderflower beers were rather nice too - Thornbridge's Craven Silk and Liverpool Organic's Josephine Butler Elderflower Ale. The Salopian Shropshire Gold was a nice drop also.

So many beers, so little time. I stopped taking notes and kicked back and enjoyed the festival. My GBBF balance sheet was well in the black. The only time it strayed into the red was due to the, sometimes, oppressive and stifling heat in Earl's Court and trying to get some drinking water to cool me down and rehydrate. Despite this it was a fantastic couple of days and I'm already looking forward to next year's at Olympia.

Many thanks to organiser, Marc Holmes and the Campaign for Real Ale for putting on a fantastic festival that exceeded every one of my expectations.

Beer and Beer People - You've got to just love them.