Iron Brews Are Good For You. 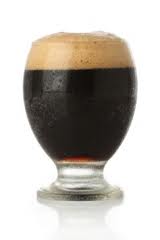 .
Those men and women in white coats have been busy again proving something that we've all suspected for ages, namely, that drinking beer is good for you.

In this case, researchers from the University of Valladolid in Spain have discovered that dark beers such as stouts and porters are richer in iron than lighter, paler beers and are therefore more beneficial to your health.

Iron is a dietary essential as it helps carry oxygen from the lungs to the muscles and other organs. Low iron intake can often leave you feeling tired, sluggish and irritable.

The research project, which was published in The Journal of Science of Food and Agriculture, analysed 40 brands of beer from around the world. Their study examined 17 Spanish and 23 beers from other countries, with 28 pale, six dark and six non-alcoholic beers. Dark beers had more than 30 percent more iron content on average than pale beers. Beers with the most iron were a dark Spanish beer (165 parts per billion) and a dark Mexican beer (130 ppb). Beers with the lowest levels of iron were from The Netherlands (41ppb) and Ireland (47 ppb).

Which is something I've always suspected.  My gran used to swear by the recuperative properties of the bottles of Sweetheart stout she used to keep by her bed in the 1970's. I even remember her taking a bottle to hospital when visiting a sick relative. Turns out granny was right after all.

Which is good news for the people organising International Stout Day on the 3rd of November.

So, get yourself out and get drinking the dark stuff safe in the knowledge that moderate consumption of it is good for you.

Posted by thebeermonkey at Sunday, August 21, 2011

Email ThisBlogThis!Share to TwitterShare to FacebookShare to Pinterest
Labels: Beer drinking is good for you, international stout day