Is this the Worst Beer Advert Ever?

Stop sniggering at the back. 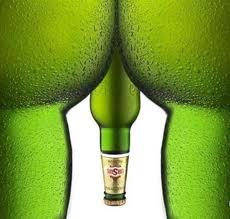 It's for Ursus beer from Bucharest and it's supposedly one of the best selling beers in it's native country. Indeed, it brands itself as 'The King of Romanian Beers'.

The lack of a caption leaves me confused as to what message it's trying to convey about the beer or the people that drink it.

That's where you come in.  I said "Stop sniggering at the back!"

I'll give four lovely bottles from my special beer cupboard for the best/funniest/smuttiest caption to accompany the Ursus beer advert.

Leave your caption in the comments section below.

I'll decide the winner this Sunday.


Over 18 and UK entrants only.

Email ThisBlogThis!Share to TwitterShare to FacebookShare to Pinterest
Labels: Beer.