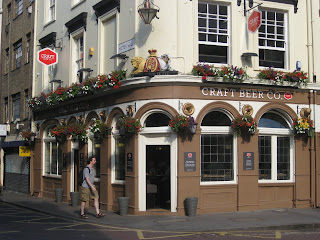 .
Whilst down in that there London for the Great British Beer Festival, I thought I'd use the time and opportunity wisely to visit some of London's pubs that have been making great hop filled waves in the London beer scene. Some, I've spent many a long night in before while others were new to me and had to be sought out and experienced for the first time.

The searing London August heat and a tube journey so painfully humid that it's final destination could have been Hades itself had left me extremely parched and in need of some liquid refreshment as I headed up from the bowels of the Underground oven and into the city centre sunshine. 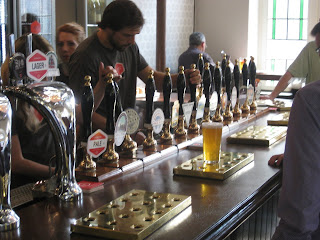 I wanted beer and The Craft Beer Co, in Clerkenwell, as my first port of call in my mini London pub tour was going to provide it.. Much has been written about it (Mr Dredge , Mr Tandleman and Mr Ghost Drinker cover it well) since it opened a couple of months ago. It's the sister pub of the Cask Pub and Kitchen in Pimlico and in it's short time trading, Craft Beer Co has managed to attract a keen following drawn to it's huge and eclectic collection of home grown and international cask and keg beer. 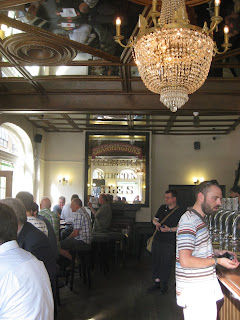 The handpumps stretch the entire length of the bar and provide the opportunity to gawp, open mouthed, at the choice of 37 different beers with 16 cask and 21 keg on offer. It's also got over a hundred bottles, including Artisanal Norwegian water that is, I presume, made with passion. But don't let the wankiness of the water put you off. It's a great pub.

Oh, and their house lager comes from Mikkeller, which is a bit of a coup.


It wasn't the only Mikkeller on as I had stumbled in to what can only be described as Mikkeller madness. Over a dozen of the Danish beers were on and picking the first beer among the throng to quench my thirst was a very difficult decision.


Spoilt for choice is an understatement. My eyes darted from pumpclip to pumpclip, left, right, left, right and back again struggling to take in the beery options available in front of me. Like a glutton in a pie shop, I just couldn't make my mind up what I wanted first but that's a happy problem to have and it's probably one that most visitors to Craft experience. I wasn't complaining as the selection in front of me was truly exceptional.

It's a cracking pub and proof positive that the explosion in the London beer scene is not just the stuff of twitterous rumour but it is happening and happening very quickly. That's great news for the growing number of beer drinkers who want to try new and different beers from a wide range of beers from home and abroad.


The cask available when I was in included Thornbridge, Dark Star, Magic Rock, Camden Town and Redemption and their commitment by Craft to recognise the value and importance of cask beer and support fledgling, young breweries can only be applauded.

With the combination of cask and keg available it's clear that the bottom line for Craft is that good beer is good beer regardless of method of dispense. Given the popularity of Craft since it opened, it's a philosophy that appears to be working.

The Craft Beer Co works not only because of the range of beers available but because it meets the tastes and sates the beery appetites of an ever evolving beer market filled with drinkers who want their next beer to be their best beer and who aren't afraid to stretch their beer horizons.

With pubs like Craft around, it's a great time to be a beer drinker.

Posted by thebeermonkey at Thursday, August 25, 2011