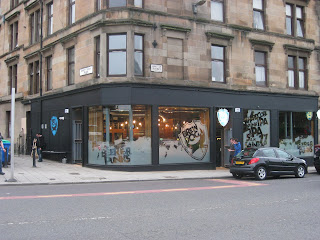 
In a wee change from my own musings on the blog, I've given over some space to a couple of guests who, over the course of two articles, will share with us their opinions of Scottish 'craft' brewers, BrewDog.

Coming soon, BrewDog shareholder, Ian Prise will be telling us 'Why BrewDog Matters' but first, Renfrewshire Camra member, Martin Doherty gives us his reflections on his visit to BrewDog's new Glasgow Bar.

"Whilst in the West End of Glasgow on Saturday, sitting in the Three Judges enjoying a delicious pint of Fyne Ales Hurricane Jack, talk turned to the newly opened BrewDog Bar further along Dumbarton Road. My friend Ross wished to give it a try and I was curious to see what all the fuss was about. Another friend, who lives in the Granite City, has been waxing lyrical about how great the BrewDog Aberdeen bar is and what wonderful beers they have both on tap and in bottles. I am not averse to the odd bottle of Punk IPA or 5am Saint, and I have in the past enjoyed their Trashy Blonde in Cask form.


So off we popped for the five minute stroll to their newly opened premises directly opposite the Kelvin Hall Museum and Art Gallery. The premises themselves are in a good location and the interior has a trendy feel about it, with what BrewDog claim to be salvaged or second hand furnishings. It was 4pm on a Saturday and the place was mobbed. We didn't have to wait to get served which is always good and there was an extensive selection of BrewDog beers and a couple of guest beers on tap which were written up on the chalkboard for your perusal. All the beers on tap were from keg as this seems to be BrewDog's favoured vessel of choice for their beers. 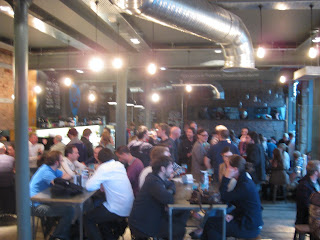 We both plumped for a pint of Punk IPA at £3.50, the first thing that struck me was how cold and fizzy the beer was. It tasted........ fine, that was it though just fine, not out of this world or lipsmackingly good, just fine. Sure, it tasted very hoppy but for me it lacked some depth. BrewDog believe in serving their beers at 6 degrees celsius and let the drinker experience the beer as it's temperature changes. As far as I'm concerned the warmer the beer became, the gassier it seemed and the taste became less pleasant.


Whilst drinking my mediocre pint I surveyed the beer list which had tasting notes and prices. I was astounded to see that they are selling 25ml measures of their Tactical Nuclear Penguin 32% abv and their Sink The Bismarck 41% for a fiver a pop! Yes a fiver! Perhaps I'd be happy to pay that for a nice 25 year old whisky buy not a beer, I don't particularly agree with beers being "sipped like a whisky", beers should be enjoyed in measures far greater than 25ml!. Given that a 330ml bottle of Tactical Nuclear Penguin retails at £35, a return of £65 from selling measures of it behind the bar from said bottle seems a bit greedy to me.


Behind the bar there are a number of fridges rammed with interesting looking bottles with unfamiliar labels. That beer labels were unfamiliar to me and was a pleasant surprise as I have certainly sank a fair number and i'm always on the lookout for beers to try whether it be from specialist shops to online mail order. I asked if they had a beer list for the non BrewDog bottled beers with percentages and pricing only to be told they didn't have one, not a lot to ask really is it? So unfortunately I'm still no wiser as to what bottled beers they actually stock.


I quite fancied a dark beer and therefore asked the 'knowledgeable' bar staff if they had any Russian Imperial Stout, after consultation with another member of staff the barmaid stated that they did have an Imperial Stout "but it's not from Russia it's brewed in the States". I asked to see the bottle to give the label a once over, I also enquired how much it was, and to my horror, it was the princely sum of £10 for a 500ml bottle (so if you were on the minimum wage you'd need to work for 1 hour 45 minutes for the pleasure). At this I left the bar. Ten quid for a bottle of beer? Hardly in keeping with BrewDog's slogan of "Equity for Punks". I can't see many students spending their grant money in this particular establishment, which given it's location in Glasgow's sprawling student land must surely have been where a majority of the projected clientele were to be coming from. 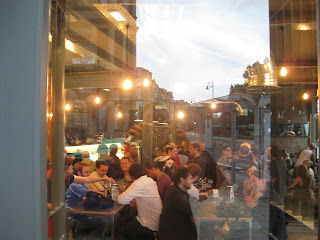 Only time will tell.

They even have the cheek of selling BrewDog glasses at £5 for a pint glass and £7 for a half pint glass. Though I'm sure any punk worth his salt would probably just 'half inch' the glass after finishing their drink. Will I be back? I doubt it. Would I recommend it? Yes.... but only for the spectacle of watching other drinkers trying to smuggle the glasses out!

BrewDog have had an almost unbelievable rise to the forefront of British brewing since their inception in 2007 to become the biggest independent brewer in Scotland. At first I was curious and bought a couple of their bottles that was available from the supermarkets at the time.I found them tasty and welcomed them as an alternative to other bottled beers that I regularly bought. More recently though I have started to tire of the BrewDog shock tactic marketing machine. The End of History beers which were housed inside dead stoats and squirrels seemed to me to be in very bad taste and a cheap way of getting mass media coverage, not to mention hiring a dwarf to stand with a placard outside the Houses of Parliament for a week to campaign for selling beer in smaller measures. 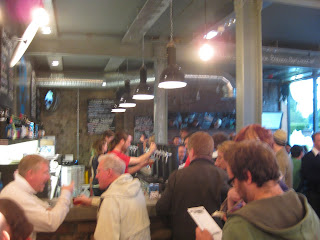 In fact, more often than not, recent media coverage has been borne out of comments made by BrewDog managing director James Watt. Comments such as the one published in Spectrum magazine. In it James Watt states "Camra are single handedly responsible for holding back innovation in British beer in the last 40 years. With an overbearing emphasis on such a narrow and boring spectrum of beers, Camra think beer has got to be served by cask, somewhere between a 3.2% mild and a 4.5 % bitter. Camra is staid, it's tacky, it's conservative, it's old fashioned, it would put your grandparents to sleep. I'd gladly line up the whole lot of them and fire cans of punk off their heads"


Quite a scathing attack and being a member of Camra I was quite shocked to read such comments. Firstly, it shouldn't really have been a shock that Mr Watt made such comments as he seems to have history in regards to offending people and I'm willing to bet this petulant outburst is directly related to Camra cancelling BrewDog's stall at this years Great British Beer Festival for failure to pay on time. Secondly any Camra beer festival I've been to has plenty beers outwith the alcohol percentage that he is quoting, this year at Paisley Beer Festival there were 17 Scottish beers from cask that had a higher abv than 4.5% and a total of 33 English beers in cask above 4.5%. In the UK alone there are more than 2500 real ales available from more than 500 breweries with styles such as Porters, Stouts, Golden Ales, Old Ale as well as the aforementioned Milds and Bitters. Hardly a narrow spectrum is it?


The biggest point is that Camra have not held back brewing innovation but have single handedly saved British brewing with their continued support of both iconic British brewers and small independent breweries alike, their continued campaigning to save local pubs, keep beer duty down and to keep real ale in any discernible drinkers thoughts.


BrewDog say they are against "bland, soulless, industrially produced beers". This coming from the brewery who produce 660,000 gallons of beer a year and are currently raising capital by way of a share offer to move to a new larger brewery on the outskirts of Aberdeen which will enable them to produce up to five times more (a staggering 3.3 million gallons). One wonders at what point does beer become "industrially produced". I believe that BrewDog is quickly morphing into everything that they claim to be rebelling against. They use the term "craft beer", which to me conjures up beer brewed in small batches with a good level of consistency, but with production set to quintuple I'm sure they will find it hard to keep  consistency in the taste, something which they have had problems with in the past and blamed on "hop shortages" and difference in each years "hop characteristics".

All things considered, BrewDog is not really my cup of tea.... or in fact my pint of too fizzy,too cold, mass produced craft beer. A man who knows a thing or two about taste is Flavor Flav and he once said "Don't Believe The Hype". I couldn't have put it much better myself. BrewDog in my eyes are currently becoming my Public Enemy No1!"