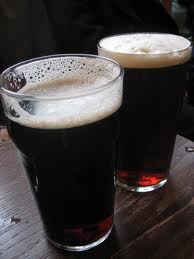 .
I write about beer. I enjoy writing about beer. Others do too and there are some very good bloggers out there who manage to communicate and articulate their opinions and ideas about the wonderful world of beer in a manner that engages, involves and helps you appreciate beer and it's beautiful subculture just a little bit more.

So, what follows are some of this month's beer blogs that I have particularly appreciated and enjoyed.

- Neil from Eating isn't Cheating blog puts forward his opinions on the question of unfined beer and asks whether "Britain is ready for Cloudy Beer"? It prompted quite a healthy debate.


- Mr Al, from Guest Beer Guide tends to write only once in a while but when he does it can be a rip roaring snortfest in which he posts the best of his Twitter feed from the previous month. A lot of it is West of Scotland beer scene related nonsense but don't let that stop you from enjoying the kneejerk, humourous comment from some of Glasgow's most sclerotic drunks.


- Alistair from Fuggled, in response to this and this, gives us his balanced view on BrewDog and their knack of being able to polarise opinion. The marmite of the beer world.


- You generally can't go wrong with Pete Brown's writings. He usually cuts through the beer bullshit and gets to the heart of the matter in an erudite and articulate fashion. In this blog, Pete introduces the August episode and final instalment of a dozen video blogs about British beer that he's been working on for the past year. It takes place at this year's Great British Beer Festival and well worth the watch.


- The last blog recommendation is easy reading in that it's not the most the word heavy blog in the world but it does contain some really lovely pictures of pubs in Glasgow. The blog Glasgow Bars and a Crane manages to take the most sumptious and attractive images of Glasgow pubs that capture the, often overlooked, beauty of these establishments. It's a lush blog and well worth checking out.

Did I say last blog recommendation?

Sod it. One more.

- While I'm on the subject of great pictoral blogs that capture the essence of a pub or beery moment, you can't do much wrong by having a look at the Beer Lens' blog for some stunning photographs of this year's Great British Beer Festival.